In recent work my team devoted in a cross region data replication solution, a simplified abstraction of the workload is as follows

The gRPC service and downstream MySQL are located in different AWS regions(such as one in EU, and the other one in US East), and the average network latency between these two regions is 70ms. We have a choice to deploy the data transfer service in either gRPC service side or downstream MySQL side. After a series of tests, we observed that deploying data transfer service in the downstream(the downstream MySQL) side has much larger throughput than deploying it in the upstream(the gRPC service) side. This article will analyze the root cause from both benchmark result and principle analysis, try to find potential solutions and give advice about such scenarios.

The benchmark result is as follows, note the absolute value of throughput is not essential, but we should pay attention to the throughput change when network regression happens. 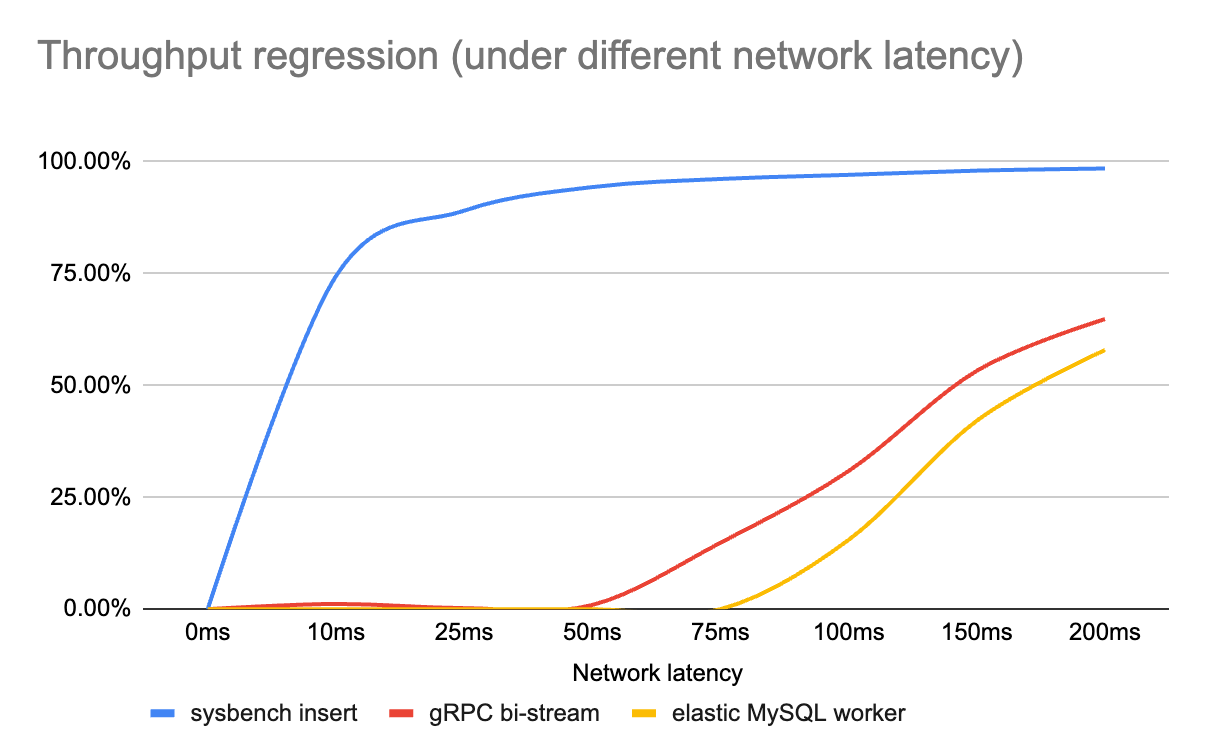 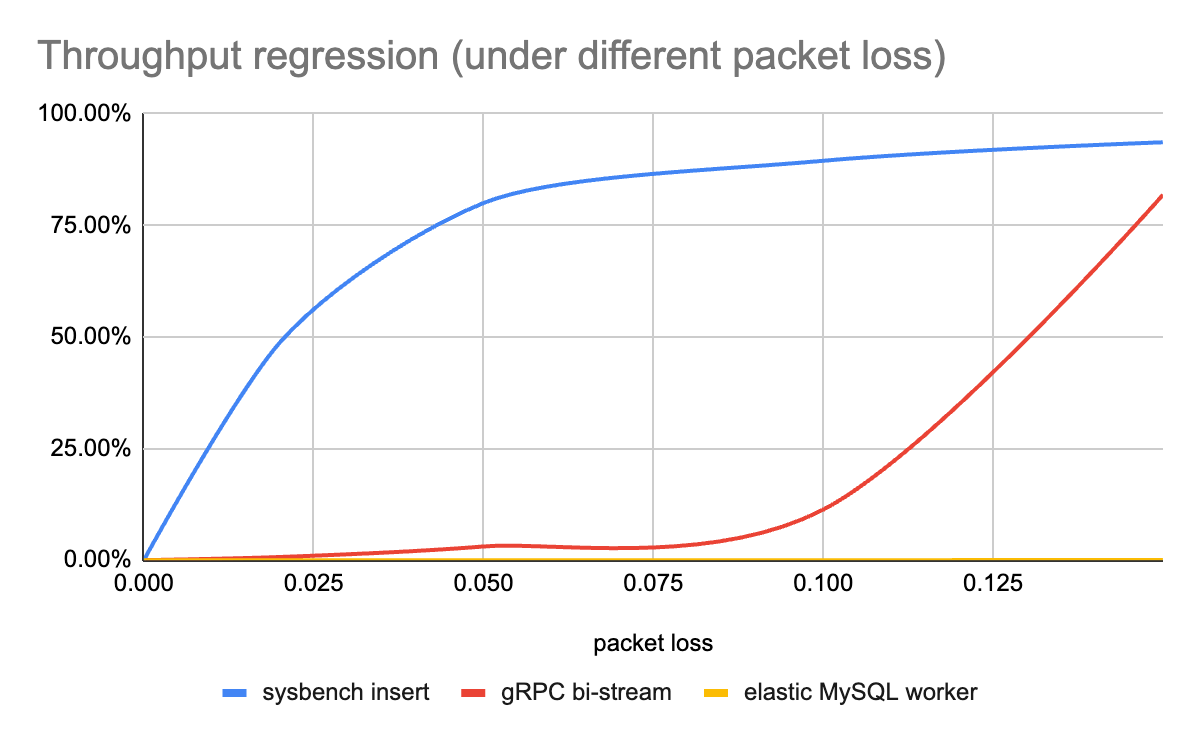 In addition to the absolute value of throughput, the jitter of throughput is another important factor of service quality. Given the gRPC bi-stream and network loss scenario, we run each test for 10 minutes, observe throughput every 5 seconds and calculate the standard deviation divided by average throughput of these points to measure the throughput stability, and the test result is as follows. 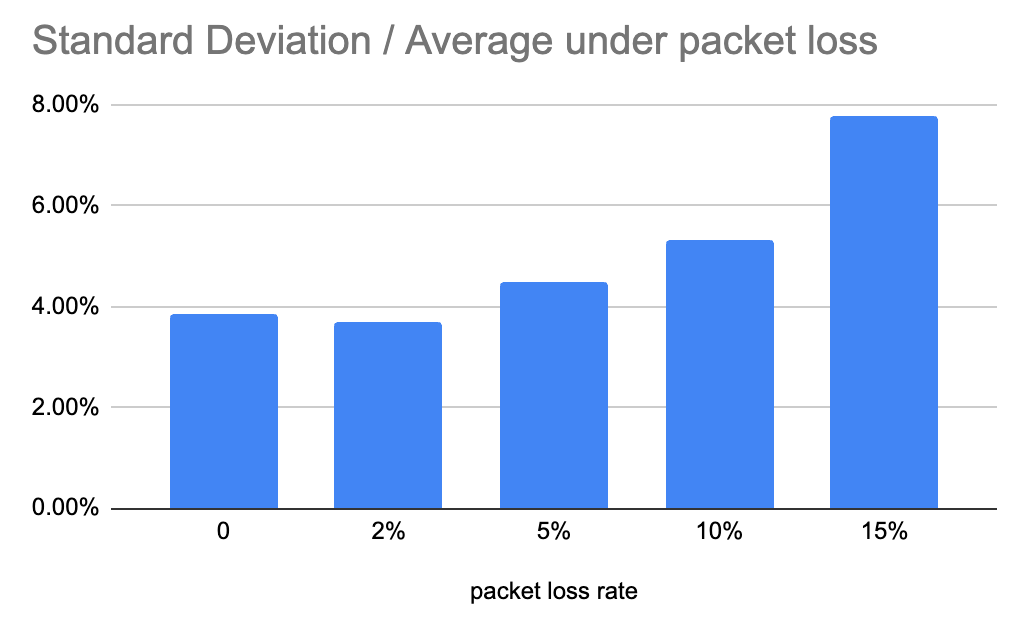 Coming back to the scenario that is mentioned at the beginning of the article, our solution is to put the data transfer service in the same region with the downstream MySQL, but whether there exists other solutions? There may or may not, which is based on the cost of system modification, this section will talk about two potential solutions, one solution is to relay the data via a suitable protocol, and the other one is trying to tune the network via some networking tunnel.

This solution is straightforward, it still deploys data transfer service in the upstream region, but it doesn’t execute SQLs directly to downstream MySQL, instead it works as a relay service, it works as a gRPC server that serves gRPC stream with translated SQLs, in the downstream we deploy another consumer service to receives translated SQLs from the relay service, and the consumer writes SQLs to the downstream MySQL. This solution has several advantages, as well as several disadvantages

Tuning the network with tunnel

kcptun is a tunnel based on KCP with N:M multiplexing and FEC(Forward error correction) for transfer error correction. KCP can achieve the transmission effect of a reduction of the average latency by 30% to 40% and reduction of the maximum delay by a factor of three, at the cost of 10% to 20% more bandwidth wasted than TCP. kcptun can be used in some cross-region scenarios to accelerate TCP stream, in order to verify whether kcptun can help the above scenario, I test the sysbench workload with kcptun again. The basic topology is as follows 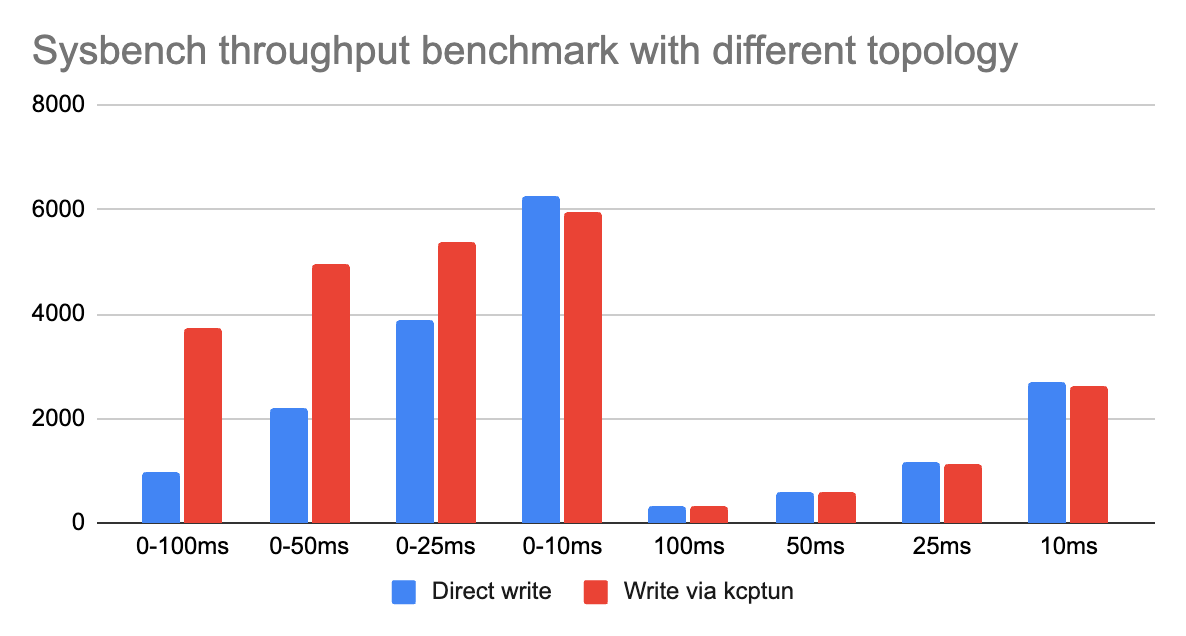 From the benchmark result, we can see if the network has a fixed latency, kcptun doesn’t make any sense to improve throughput, even a little regression. On the other hand, if the latency of network is not stable, the larger latency jitter exists, the higher throughput improvement will be gained with kcptun. Considering the network situation and the overhead of KCP encoding/decoding, this strategy is not a silver bullet but can improve performance in part of scenarios.

There still exist many topics that have not been discussed in this article, such as