Latency is one of the most important metrics in system performance, different systems have various latency requirements, such as the read latency of a relation database maybe less than 50ms, the GC latency of a programming language should be less than 10ms or 1ms, while the latency requirement of two micro services under the same data center could be less than 0.2ms. It is not always latency sensitive in every single part of a system, but as a matter of fact there do exist many components that are latency sensitive and we must be very careful when we design and implement these components or systems.

A lot of articles have talked about system latency, from both the high level, macroscopic perspective, such as the latency of a complex architecture; the latency from systemic interaction such as http API invocation, database read and write, cache access; the latency of operation in programming language such as memory allocation or function call. And the low level, or the underlying system, such as the latency in memory access, IO access, TCP packet transmit, etc. The following latency table is from book Systems Performance, and the project napking-math also provides a table about latency numbers. 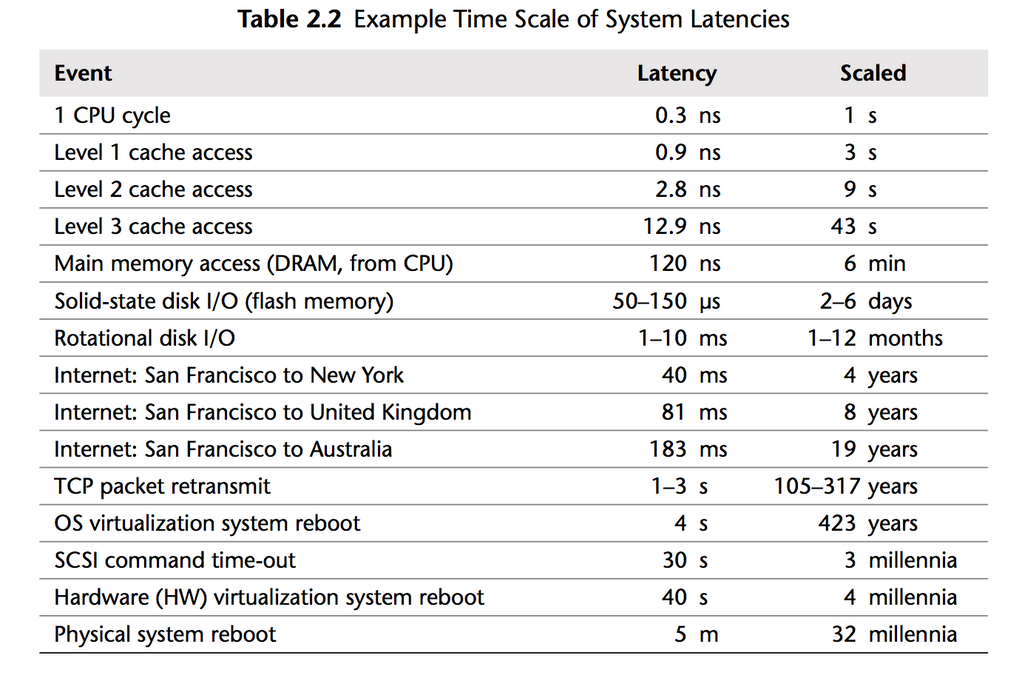 In this article I will focus on the latency in Golang programming language, including API in some golang libraries; golang specific feature such as goroutine create and destroy, channel access; golang runtime latency such as GC latency etc.

In the real world system could be far more complicated than the above cases, latency of the whole system is contributed by pieces of code/logic, knowing the latency of each single part is not the silver bullet, but the foundation of performance tuning. Besides we can use some profile and trace tools to diagnose the system performance, such as the cpu profile and trace tools shipped in golang pprof. At last I will quote some advice about performance tuning given by Dave Cheney in the High Performance Go Workshop in a gopher conference.

Start with the simplest possible code.

Measure. Profile your code to identify the bottlenecks, do not guess.

If performance is good, stop. You don’t need to optimise everything, only the hottest parts of your code.

As your application grows, or your traffic pattern evolves, the performance hot spots will change.

Don’t leave complex code that is not performance critical, rewrite it with simpler operations if the bottleneck moves elsewhere.

Always write the simplest code you can, the compiler is optimised for normal code.

Shorter code is faster code; Go is not C++, do not expect the compiler to unravel complicated abstractions.

Shorter code is smaller code; which is important for the CPU’s cache.